Briefly:  My son called to share the ‘facts’ dispersed in some guy’s video which purportedly proved the following:

My response to these points, in brief, were:

And then, in today’s text, Jehovah shows he was listening! And he once again, so eloquently, adds to me and my son’s discussion the following: 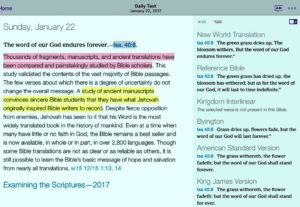 I promptly forwarded the above text to my son. As usual, no response back yet. One day, I pray that he will respond, and that it will—at last—be an acknowledgement of love and worship for our great God Jehovah.

Jehovah does have his eyes upon us. He is listening to those who love him.  O, I well know! My list of ‘Believe Or Not’ stories continues to grow.  How happy I am for Jehovah’s undeserved kindness!